What an exciting end to this leg of our tour of Dan Leno – A Royal Jester! starring Steve Royle.It was brilliant to have comedian Peter Kay in the audience and for him to take the time to meet the cast backstage afterwards.

It has been brilliant and the audiences we have had across the country have been fantastic – as have the reviews. We were thrilled to have the legend that is Roy Hudd OBE in the audience at the Royal Hippodrome Theatre in Eastbourne. 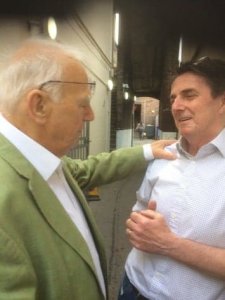 “A play that captures the heart and soul and genius of our greatest Victorian comedian, Dan Leno ‘The Funniest Man on Earth’. His triumphs, his sorrows, his unfulfilled dreams and his fulfilled disasters. It is beautifully cast and played, very moving and, best of all, it is very funny. Steve Royle as Leno is a revelation – a master comic playing a master comic.” Roy Hudd OBE

Our final review for Lytham Hall was very much appreciated as well:

“A standing ovation on a glorious summer evening at Lytham Hall was a tribute to the power of the writing by David Slattery-Christy and a simply outstanding performance by Steve Royle. Set in Camberwell asylum at the end of Leno’s life the play explores the mental confusion of the Victorian Music Hall star Dan Leno, now unable to distinguish his stage persona from his real self. Steve Royle displays complete mastery of every type of physical and verbal comedy, brilliantly portraying Leno as extrovert, vulnerable, irascible and child-like all at the same time.
The music hall turns are the highlights, particularly the Beefeater sketch where Royle exploited the open-air setting to dragoon two of the audience on a walk through the picnickers.
Andy Cooke, Nicole Violet and Lou Steggals as his doctor, wife and nurse help to explore and explain Leno’s mental muddle, whilst Neil Rowland as his somewhat spiky brother is excellent. The pantomime scene at the end is a pleasing enhancement since the play’s premiere at last year’s Lytham Festival and the presence of Peter Kay, incognito amongst the audience, suggested that this funny yet poignant show is something very special. Next stop, London’s West End next year.”