“A beautiful book, and beautifully written.”
Kat Orman, BBC Radio Oxford
“All the hallmarks of a classic.” 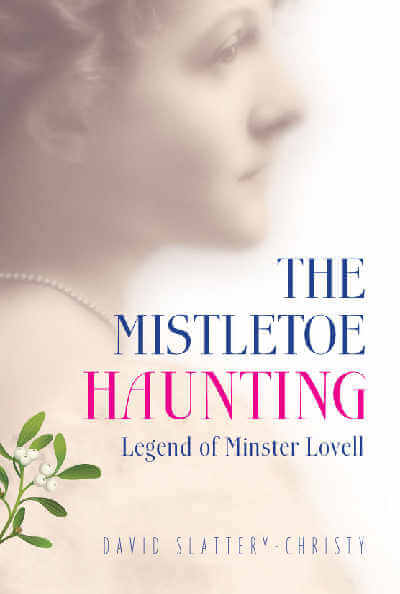 “There have been various stories about the bride who,on her wedding night, hid from her husband in a game of hide-and-seek in an old oak chest. Unknown to her a hidden spring caused her to be locked in. Such stuff are nightmares made on! But it is the poem The Mistletoe Bough, subsequently turned into a popular Victorian song, which David Slattery-Christy has used as the springboard for his own re-telling of the full, tragic tale.
His new novel THE MISTLETOE HAUNTING is a must for anyone who loves ghost stories. Readers who are familiar with his engrossing biography of the real life Mildred Aldrich (“Mildred on the Marne”*) will be aware of Slattery-Christy’s ability to use his knowledge of real locations and events to atmospherically evoke time, period and place – here, the City of Oxford and the nearby village of Minster Lovell. He weaves his material into an intriguing, suspenseful whodunnit with a cast of complex characters. Whilst the principal narrator is the spirit of the victim herself, the author also introduces us to the other main characters in both their past and present incarnations, playing with time zones as he messes with our heads to create yet another piece of compulsive reading!”
[*See also: 0752497685 Mildred on the Marne: Mildred Aldrich, Front-line Witness 1914-1918]

“Based on a famous poem The Mistletoe Haunting takes the best of this genre and adds plenty of original twists to make it an extraordinarily good read. The writing is quintessentially English and strongly evokes the ambience of the story to make it very easy to imagine. As far as the ghost/chill factor goes, it isn’t overplayed, making one of the more intelligent ghost stories I have read. A lot can be drawn from inference as well as what you are told and this really maintains the suspense to the very end.”

“This is an intriguing ghost story set in both Edwardian and modern period. The flash-backs and flash-forwards are timed perfectly to maintain the tempo, build the anticipation and keep the pot boiling. There are plenty of twists, turns and surprises as the tale reaches its climax.” A Mistletoe Bride is murdered on Christmas Eve, 1893. Her ghost haunts the family stately home, Willow Manor, until her remains are discovered and the truth revealed. Set in the present day and Victorian England, the tragic young bride can at last share her story and put right the terrible injustice that destroyed her family and those she loved. The city of Oxford’s Randolph Hotel, and the village of Minster Lovell, the site of the stately home, are the locations for this heartwrenching story of deceit, love and betrayal. The Mistletoe Bride, a local legend, was popularised in a poem by Thomas Haynes Bailey in 1884, and then set to music to become the popular song: The Mistletoe Bough!

5* Review from Simon at Goodreads
“I was reading this and kept thinking it would make a great film but having read the authors credits it’s no wonder. Do check out his website. Re the story, definitely one of the best ghost stories I have read. Original and intelligent with the added twist that it’s the ghost that actually tells the story so you get a totally different perspective from your archetypical chiller. Read over a wet British weekend everything else got abandoned until I finished it. Very, very good!”
5* Amazon Review

“Extremely engaging story from the very beginning until the last page. I was desperate to find out the ending so read the book within a couple of days which is unusual for me.”

The most memorable ghost stories are frightening because they expose the demons within us and in The Mistletoe Haunting – Legend of Minster Lovell, David Slattery-Christy achieves this with admirable aplomb. Too many ghosts in fiction are simply used for shock value, but there’s a mournful quality to Slattery-Christy’s prose as he exploits the line between the seen and unseen, where the living meet the dead and the mysteries of life are revealed. He understands that most ghosts are sad, and are attempting not to frighten us, but to urgently communicate something that they might find rest, and to this end his novel seems perfectly pitched. He knows just when to linger and create atmosphere, a sense of place, or sympathy with his characters, instead of falling back on trite clichés and this adds immeasurably to both the quality of his writing and the intricacies of his plot. The legend of the Mistletoe Bride, immortalised in Thomas Haynes Bayly’s poem The Mistletoe Bough certainly provides the scope to descend into routine shock and horror, but Slattery-Christy’s twists add for a far more suspenseful and ultimately chilling read that is nigh on impossible to put down. A gothic ghost story  to be read with the lights on,  The Mistletoe Haunting – Legend of Minster Lovell has all the hallmarks of a classic and is recommended without reservation.

Stormi at Boudless Book Reviews on Amazon.com in USA
“The Mistletoe Haunting was a great ghost story, one told by the ghost! You don’t see that often. I have always enjoyed a good ghost story and this one is sad and very chilling down to the soul, especially the ending. It literally gave me chills!

Ellen is to be married, but unbeknownst to her she will never be happy because of a jealous sister and a betraying fiancee. She has all odds stacked against her, but she doesn’t know the truth.

This was a very well written, chilling tale of love, loss, and betrayal. I felt for poor Ellen, she really deserved to be happy. She wanted to be a bride and yet her happiness was so quickly taken from her. Charlotte was indeed evil! No other words can describe her. I know, I couldn’t stand her from the second she was introduced!

I’m not sure if this is just a work of fiction or if this was an actual story from the past that now haunts and tells such a sad tale. It was definitely a fantastic ghost story and in my opinion would make a great movie!

“Superbly crafted work with an engaging and sympathetic protagonist. Moving between modern times and the Edwardian era it gradually unravels a moving tale about a young innocent betrayed by those around her. David Slattery Christy’s narrative is absolutely convincing and flawless in its depiction of Edwardian England and its social milieu. As the book moved towards its conclusion it was impossible to stop reading and it was a page turner.
The villain receives their just desserts. This sensitively written tale is highly recommended.”

The image used to depict Lady Ellen Forsyth is that of Victorian/Edwardian actress Grace Lane. For me she captured the innocence and beauty of the character. I cast her posthumously in the role of the Mistletoe Bride and hope she would have approved.                                  David SC  / 2016