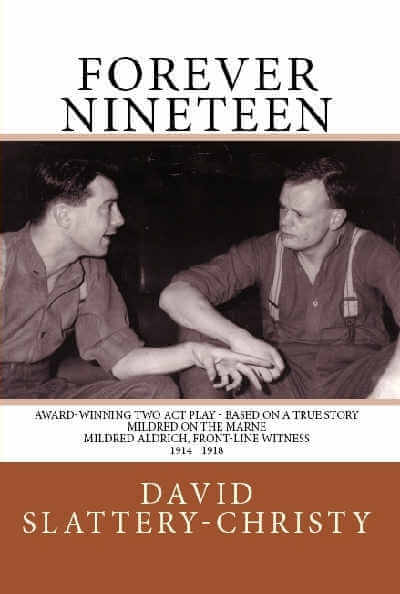 “The mysterious caretaker, Madame, is far from what she seems, and then there is the chilling whistling noise on the stairs.”

The ghosts of soldiers and the very characters the writer is researching play out scenes while she sleeps, until the two world meet in a powerful confrontation and solution.”

“This new play telling the story of Mildred Aldrich, and American veteran of the Great War, has earned praise for its skilful crafting.” From award-winning playwright and director David Slattery-Christy. Forever Nineteen is a critically acclaimed play based on the WW1 experiences of American Mildred Aldrich – including the song ‘No Man’s Land’ (The Green Fields of France) by Eric Bogle – William McBride from the song is also a main character in the play. Set in Mildred’s house ‘La Creste’ overlooking the Marne Valley, France, in 1914 and the present day.

“A wholly enthralling piece of drama…Based on the true story of Mildred Aldrich, an American living in France during the First World War, who witnessed the horrors of the Battle of the Marne and devoted herself to helping British soldiers, the play uses both flashback and the ghosts of the dead warriors to create an intense, deeply atmospheric drama. A novelist, Jenny, arrives at the house where Mildred lived to research a book about the First World War. She hears someone whistling ‘It’s a Long Way to Tipperary’ catches the thunder of guns and in her sleep is visited by Mildred, her maid, and three soldiers. The Tommies do more than recall the horror and camaraderie of the war. The bitterness at the slaughter endured by a whole generation persists at still being tied to the house, for their spirits await heavenly freedom. They remain ‘Forever Nineteen’, until they reveal themselves to Jenny, who sets them free and discovers the truth surrounding the mysterious house.” The Stage

As part of my research for my biography on Mildred Aldrich, I was given access to Mildred’s papers and journals held at the Schlesinger Library, Harvard University. I would like to thank Ellen M. Shea and all the research assistants and library staff for their kindness, help and patience. I couldn’t have completed this book without them. I also feel very proud that a copy of this book is held in the Schlesinger Library and at other universities across the world. DSC